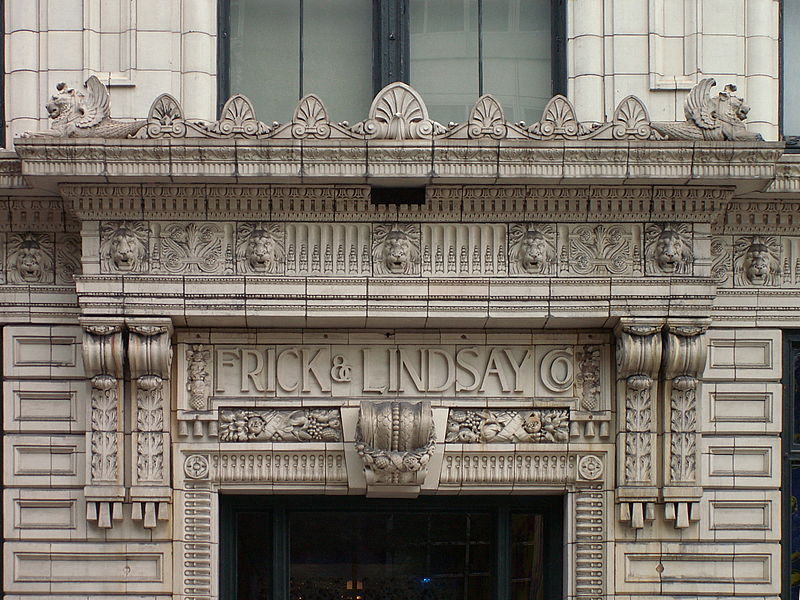 Pittsburghers who remember the days before we had the largest museum in the world dedicated to a single artist will remember this as the Volkwein’s building, which housed one of the largest music stores in North America. (Volkwein’s moved to the western suburbs, where the tradition of carrying more music than anyone else continues.) But it was built as a warehouse for the Frick & Lindsay Company, a purveyor of “industrial supplies.” If warehouses were commonly as splendid as this, there would be regularly scheduled tours of the warehouse district.

No one knows who designed the original building, but in a Post-Gazette article from 1993 (when the building was under restoration), Walter Kidney suggests the William G. Wilkins Co. The details were originally in terra cotta, but the cornice had been entirely removed and other details were damaged. During the restoration, the cornice and some of the other decorations were reconstructed in glass-reinforced concrete from photographs, records, and imagination.

The Frick of Frick & Lindsay was William Frick, a distant relative of the famous robber baron Henry Clay Frick.

Camera: Konica-Minolta DiMAGE Z3. The picture of the whole building below is a composite from six photographs.

0 responses to “The Andy Warhol Museum”