This was the home of one of the founders of the famous Boggs & Buhl department store, which lasted until 1958. A few years after Father Pitt took this picture, this grand house was grandly restored and opened as “The Inn on the Mexican War Streets.” Before the restoration, it had been the parsonage of Trinity Lutheran Church next door, creating a curious spectacle of a parsonage considerably grander than its squat little modern church. But the house needed more maintenance than the church could afford: in fact the new owners spent more than a million dollars fixing the place up.

If you look at this picture, you may have a vague impression that something is missing from this house; but unless you are in the architecture business it might take you ages to guess what it is. There are no gutters and no downspouts. It seems that Mr. Boggs had a thing about gutters. Instead, there is a remarkable internal drainage system that, when it works, carries runoff through the walls, and, when it is broken, pours runoff in a burbling cascade down the grand staircase. That is one of the reasons it took a million dollars to restore this house.

A small but very tasteful church (finished in 1909) that faces the beautiful expanse of West Park across North Avenue. The architect, according to this brochure, was Robert Maurice Trimble, a native of Allegheny. 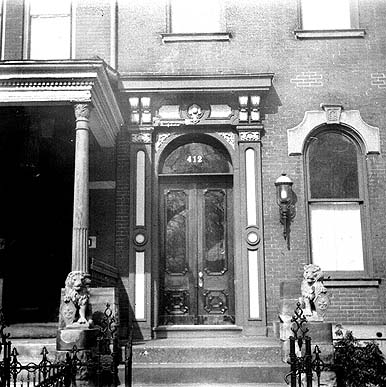 A beautifully proportioned entrance on North Avenue in the Mexican War Streets. If the picture looks like something from the 1930s, it isn’t. But the camera is. It’s an old Agfa Isolette, using Croatian film whose formula hasn’t changed since this camera was new.

The Mexican War Streets are mostly flat, but at the back end they start to creep up the hill toward Perry Hilltop. This beautiful block of rowhouses is just about perfect: the street paved with Belgian block, the houses well taken care of but not ostentatiously overrestored, and filled with friendly neighbors. 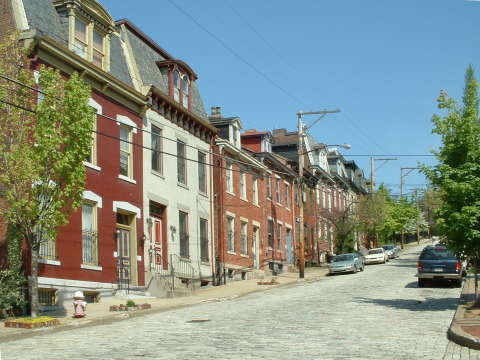 Brick sidewalks have their own charm, and they become more charming as they age and grow more difficult to walk on. 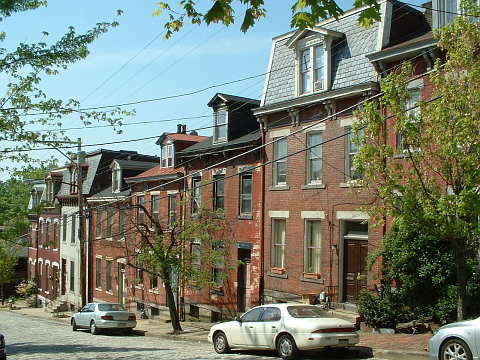