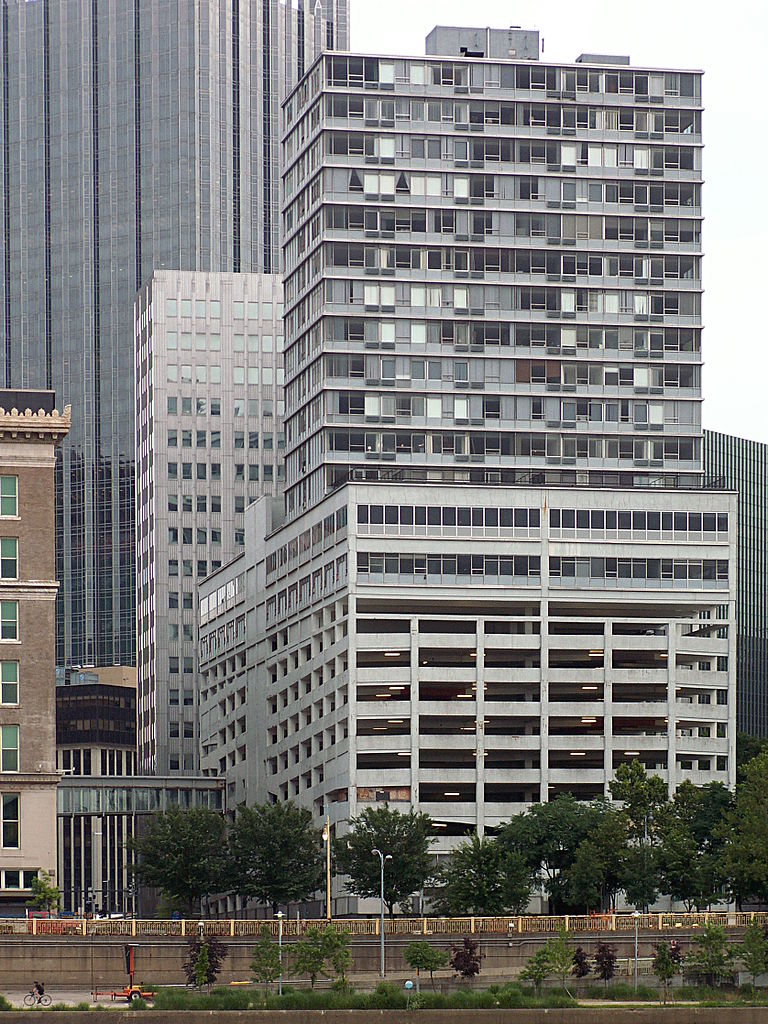 This is an early work of Tasso Katselas, whose public buildings litter our landscape. Every generation seems to produce a favorite court architect, the darling of the Allegheny County nobility, and Tasso Katselas was that architect until his retirement about ten years ago.

This particular building, built in 1966 as Allegheny Towers, is on many short lists of the ugliest buildings downtown, and Father Pitt tends to agree with that assessment. It is a parking garage halfway up; then, on top of that, there is a stack of miscellaneous apartments that look as though someone piled them there temporarily, intending to slide them into a finished building later. There is no rhythm to the apartment section, not even a jazzy syncopation; the windows are random noise. Compare it to the one arm of the cool and elegant Two Gateway Center behind it and to the left, or the textured glass wall of PPG Place behind that, and its lack of harmony will be immediately apparent.

But Father Pitt would not have you dismiss Tasso Katselas on the basis of this one building, which is probably very comfortable for the residents. He has given us buildings Father Pitt loathes with a passion, and buildings Father Pitt loves with an immeasurable love. His Pittsburgh International Airport terminal is peerless: the best airport terminal Father Pitt has ever seen. It minimizes the distances between the farthest gates; it controls security easily (and remember that it was built at a time when security was not nearly so much of an obsession as it is now); and it is the only airport terminal Father Pitt knows where every word of the pages and announcements is clearly audible. How many times have you been in another airport and found yourself thinking, “I hope Mrnmkh Pthhrmrmpt recognizes his name, because I certainly don’t”? That never happens at Pitt, and it took some serious architectural thinking to make those acoustics happen.

And that is the thing that probably made Tasso Katselas’ career: his buildings may be beautiful or ugly, but they are almost always practical. They work very well for their intended purposes, because the architect has clearly taken accommodating those intended purposes as his first duty, rather than as a luxury that one might be able to afford after one has indulged one’s pet design obsessions.