Originally a German Catholic church. The building has long been abandoned by its former Catholic congregation (which merged with St. Peter’s), and now bears a sign for Deliverance Center Original Church of God. It could use some work, but the basic structure looks sound.

Old Pa Pitt took this composite picture back in April and then forgot about it. Here it is now. It’s quite large, so don’t click on the picture if you’re on a metered connection. 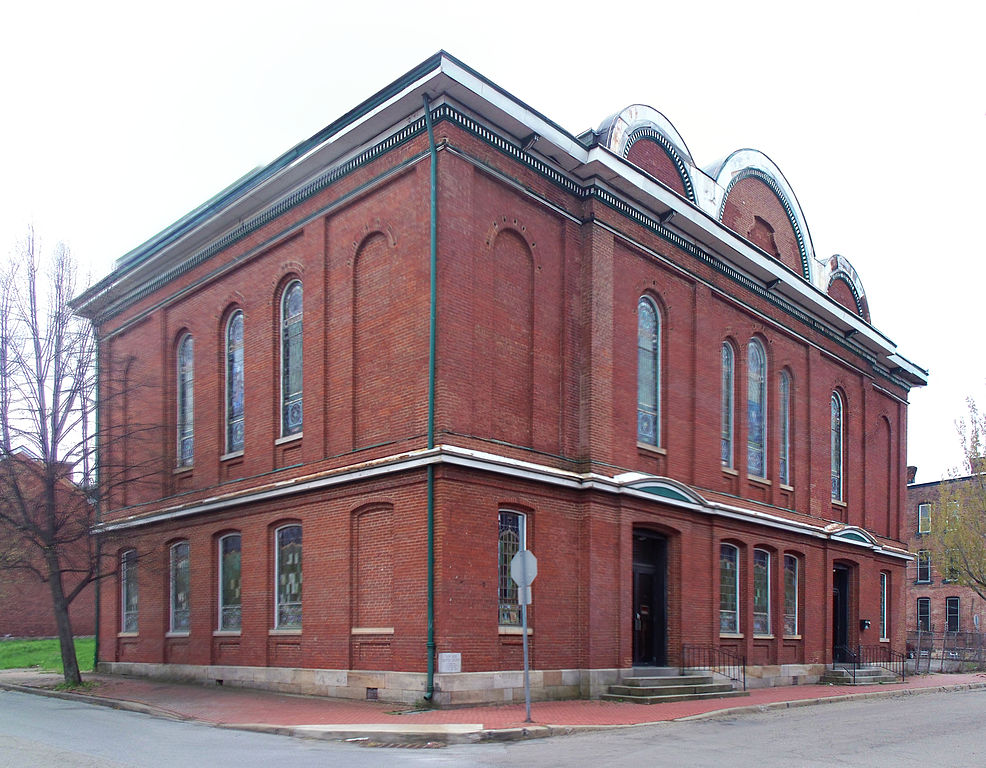 Now the New Zion Baptist Church. Here is another of those city churches where the most use is made of a tiny lot by putting the sanctuary on the upper level. This church was built in 1867, just two years before the South Side Presbyterian Church; and without finding any historical pictures, old Pa Pitt would hazard a guess that the South Side Presbyterian Church looked rather like this before the grand front with tower was erected in 1893.

This picture was made from multiple photographs taken in fading evening light, so it is not perfect; but Father Pitt wanted to show you another example of these upstairs city churches.

The graceful arch of the West End Bridge, as seen from the union Dale Cemetery. Below, with Manchester in the foreground.

The mighty Argus C3 is the most legendary of all 35-mm rangefinders. Its standard lens was indifferent, it was heavy as all get out, it was needlessly complex—but it sold for three decades and made 35-mm film the standard in still photography.

Here are some pictures of the Victorian rowhouses in Manchester taken with one of old Pa Pitt’s C3s and the standard 50-mm Cintar lens.

And here is the beast itself, affectionately known as the “Brick,” for reasons that probably don’t need much explaining. It also weighs about as much as a brick of comparable size. This camera has starred in more movies than Cary Grant, always playing the “professional” camera. It was the magazine photographer’s camera in The Philadelphia Story; it was the magical reporter’s camera in the Harry Potter series.

Now let us enumerate the many virtues of the C3. First, it looks really technical, which was a big selling point. It was much cheaper than the better European cameras of the same era, but it had all those gears and dials on the front, which made it look quite expensive and impressive. Its mechanism is simple and well-designed: if you pick up a C3 that hasn’t been used in forty years, there’s a better than even chance that it still works. The lens is interchangeable (by a process that would try the patience of Job, if Job had been a photographer), and fairly good German wide-angle and telephoto lenses were offered. It’s built like a tank; if you drop it, you’ll probably just pick it up, shrug, and go on shooting.

To take a picture, you first set the shutter speed on the shutter-speed dial, then the aperture on the lens. Then you look through the rangefinder window and find the distance, which—amazingly—also focuses the lens by means of the coupling gear on the front. (An astounding piece of automation!) Then you move your eye to the viewfinder and compose the picture. Then you cock the shutter with the lever on the front. Then you push the shutter button and take the picture. Then you push the film release to the side and wind the film to the next frame. All this does not quite happen in the blink of an eye, but you can get pretty good at it after some practice.

This extraordinary row of identical Second Empire houses is one of Pittsburgh’s architectural prizes, and the neighborhood itself is an interesting case study in preservation. Although it lost its business district to a horribly misconceived urban-renewal project that replaced urban shops with suburban ranch houses, Manchester has kept most of its opulent Victorian rowhouses, many of which were restored with money provided by billionaire news magnate Richard Mellon Scaife. The restoration was accomplished without displacing the lower-income residents of the neighborhood, so Manchester is one of the few historic districts in the country that have been restored without being yuppified.

The picture was taken with a Kiev-4A camera.