You can tell it’s Ash Wednesday because churches in all the neighborhoods are offering fish ’n’ at. This church in Brookline was Presbyterian until recently, but now appears to be nondenominational.

Brookline Boulevard, known simply as “the Boulevard” in the neighborhood, is the broadest commercial street in Pittsburgh—which surprises visitors from flat cities, where it would be at best a middling business street. It’s a curiously one-sided business strip: almost all the businesses are on the southwest side, the northeast side being primarily residential.

That may be because, for much of the neighborhood’s life, it was effectively two streets. When trolleys ran in Brookline, Brookline Boulevard was two narrow strips for cars, with trolleys in a separate median in the middle—much like Broadway in Dormont along the current Red Line. Removing the trolleys and paving the median created the exceptionally broad street.

The Brookline business district is one that is seldom thought of as a destination for shoppers from out of the neighborhood. But it should be. It has very few chain stores, but it is prosperous enough that storefronts are seldom empty for long. The result is a delightful mix of little one-off shops, cafés, and ethnic restaurants.

The tower in the distance is the lookout tower of Engine House Fifty-Seven.

A firehouse that looks very much like a firehouse, this was built in 1910, when the neighborhood was young, at a high point from which a fireman in the tower could see for miles.

Brookline today is a pleasant city neighborhood whose central avenue, Brookline Boulevard, is the broadest commercial street in Pittsburgh–a fact that will greatly surprise visitors from other cities, where residential streets may well be broader than Brookline Boulevard. In 1905, it was mostly vacant lots, but this advertisement promises a glowing future that–for the most part–actually came to pass. The neighborhood will enjoy even greater advantages when it is taken into the city of Pittsburgh: “the vote has been taken, the matter is officially settled.” The acrimonious annexation of Allegheny was still very much up in the air at that point, and the public would need assurance that Brookline would not present similar difficulties. 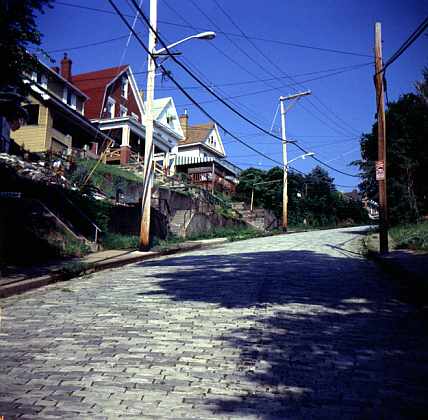 Pittsburghers call it “cobblestone,” although real cobblestones are irregular roundish rocks, much harder to drive on than Belgian block. As a pavement, Belgian block is just about ideal for neighborhood streets. It lasts almost forever, it’s attractive, and it slows traffic to a safe pace on a residential street. Since most people think the object of driving is to go as fast as possible, most people hate Belgian block, and more and more Belgian-block pavements are disappearing under smooth asphalt. But there are still hundreds of Belgian-block streets in Pittsburgh and the inner suburbs.

In neighborhoods like Brookline, cheaper brick pavements were used on flat stretches of street. The more expensive Belgian block was reserved for hills, where it gives far better traction in wet weather than brick does.